Apparently, the reason Russians don’t smile at each other on the streets is because smiling is generally considered to be something to be shared with a friend. Smiling at a stranger is considered to be an “Americanism” and is assumed to be insincere. Even Russian waiters and store clerks will usually not smile at you. In the metro, people even tend to avoid eye contact with other people…

In addition, it seams there is some geopolitics behind smiles, so to speak. Let me explain.
In general, the American smile has a terrible reputation in Russia. The campaign started in the early Soviet era and continuing until the late 1980s, the Soviet print and television media carried regular reports called “Their Customs,” which focused on contemptible bourgeois lifestyles in the United States and other Western countries. A favorite topic of these reports was the infamous American smile. Soviets were told that behind the superficial American smile is an “imperialist wolf revealing its ferocious teeth.” The seemingly friendly American smile, Soviets were told, is really a trick used to entice trusting Soviet politicians to let their guard down, allowing Americans to deceive them both in business deals and in foreign policy.The message was clear: Feel fortunate you live in the Soviet Union, which has an honest moral code of conduct, where people trust one another and where there is complete harmony at work and among different nationalities. In reality, the only smiles people saw in public were the ones depicted on ridiculous Soviet propaganda posters showing the idyllic workers’ paradise.

There is a very interesting article about that in The Moscow time, which you can access here.

We had the feeling, though, that young people are behaving differently. They were much more curious about us and pretty often trying to interact with us, even with a very limited knowledge of English.
Here in Tuymen for instance, Alec and Andreï came to us to know our names…
Later on, a bench of school mates didn’t have any problem in being photographed. 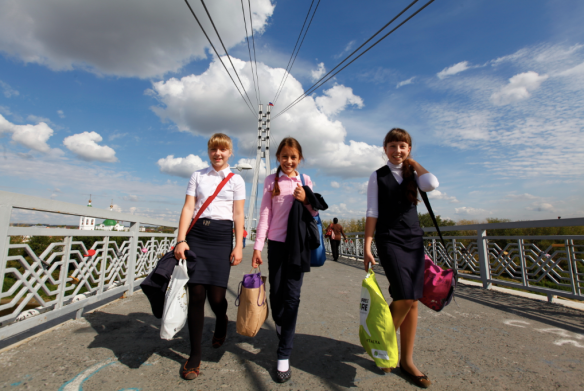 And even young military guys seem to be quite curious.
Dimitri, hereunder, brought us to a commercial center we couldn’t find in Novossibrisk. He also wanted to know more about France’ position regarding Syria… I didn’t really answer the question though!

4 thoughts on “Why don’t Russians smile?”