They call it the DMZ – Stands for demilitarized zone, this famous 4 km thick line along the 38th parallel, dividing Korea. 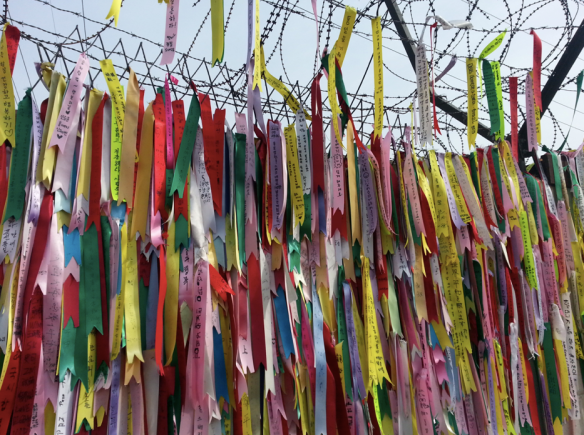 Peace messages are hanged to the barbed wires.
As a tourist, you can watch a movie were South Korea showcases the country’ courage. You can enter different tunnels, dug by North Korea to invade South. You can observe the other side from an outdoor platform.
Even though this is very conventional, visualizing North Korea doesn’t let you indifferent. This last trace of the Cold War brings you back in the 20th century in a quite striking manner.

A train station was built by South Korea to join the two countries by train, even though North Korea forbids access by train to its territory.
I couldn’t feature out if this railway station was meant to be a provocation, a message of hope, or just a way to be ready for trade when North Korea opens doors someday.

Many South Koreans are waiting for that moment to come. Like this girl we met in a coffee shop. SHe was speaking English perfectly, as she learned fashion at St Martins School, in London. She had to go back to Korea for visa reasons but will be back to Europe next year to study fine arts, as Korea is less open to contemporary artists. Anyway. She was telling us that she know she has a great uncle and a family in North Korea, but never had a chance to meet, or even exchange a phone call. “For me, did she say, this is very abstract, but for my dad it is very real”.