Of course, with the growing popularity of rugby, everyone has heard about Haka, this ritual performed by the All Blacks before starting a match. But it has also been adopted by other national teams representing organizations such as the Armed Services and the Police. 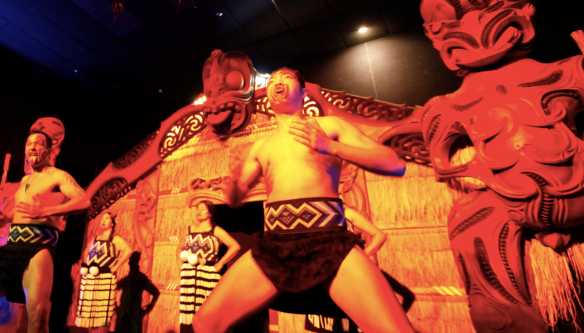 The haka is a physical challenge and a statement of intent that puts the opposition on notice that the contest to come is a serious one in which the participants will give their best. Today, we attended a show made up for tourists, with only five people on stage, but this was already amazingly strong, impressive, and scary somehow.

Despite the inroads of the Western world and foreign influence, Maori culture has undergone a renaissance and retains a vibrancy that ensures not just its survival but its continuing evolution and growth.

One of the most important factors in the revival of Maori culture has been the energetic approach taken to the teaching and use of the Maori language, an official language in the country, together with English and NZ sign language….