Yesterday, we left Karakol and followed the South side of the Issyk-Kul Lake.

Overgrazing and soil degradation are major problems affecting all the Central Asian republics. The steady rise in livestock grazing has unhinged delicate ecosystems and accelerated desertification and soil erosion. From 1941 to 1991 the population of sheep and goats more than doubled to 5.5 million in Turkmenistan and quadrupled to 10 million in Kyrgyzstan, while a third of Kyrgyzstan’s available grasslands have disappeared.
Since the end of the Soviet era, land has been privatized and divided. Economic hardship, a loss of effective management and a lack of governmental infrastructure have seen flocks numbers dwindle to about six million (for 5 million inhabitants).

This being so, landscapes are stoning and the three of us feel like we have never seen sheeps before !
After a few hours of driving, he get to our night camp : yurts !

We will meet there one guy from SIngapore traveling on his own and a French couple, visiting their cousin who works at the French Embassy in Almaty, Kazakstan. He will give me many advice for the rest of my trip in Central Asia, what roads I should avoid for safety reasons, where would be the best location to get a visa, etc. An unexpected briefing in the middle of nowhere, on the shore of the Issyk-Kul lake. 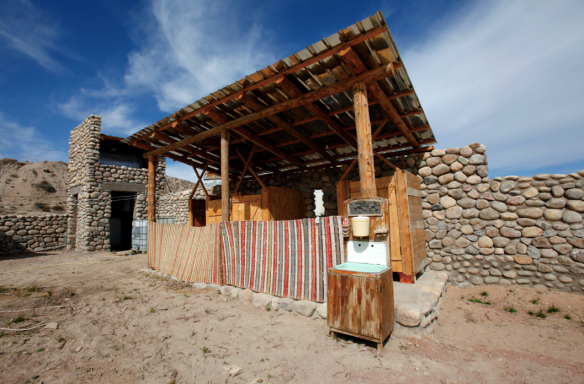 The kitchen and stove

My bed and lovely linen… I slept like a babe.